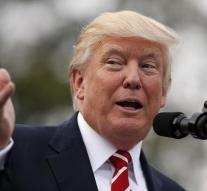 washington - US President Donald Trump can largely carry out his temporary entry ban for travelers from Yemen, Sudan, Somalia, Syria, Libya and Iran. That was the decision of the US Supreme Court on Monday, after lower courts blocked Trump's plans.

It is a preliminary ruling in the case surrounding the contested measure. The Supreme Court will only be expanding on the issue in October. The government had therefore submitted a request for a ban on the entry ban while waiting for a final verdict.

The court agreed in part with it and also decided that a temporary ban on refugees may take effect in part. Nevertheless, the supreme judges lay down restrictions on the government. The measures may only relate to 'foreign citizens who do not have a bona fide relationship with a person or entity in the United States. '