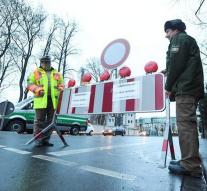 augsburg - Approximately 54,000 inhabitants of the German city of Augsburg spend the Christmas elsewhere because by a British bomb is defused World War II. This is the largest evacuation in Germany since the end of World War II.

It is a particularly serious bomb of 1.8 tonnes which was discovered by construction work. During the cleanup is an area cleared with a radius of 1500 meters. According to a police spokesman could start work between 14. 00 and 15. 00.

The people must be out of their homes later than 10. 00 hours. Then will check for four hours, nine policemen that there are no longer in the area. Residents are collected at six sites, but most have gone to family or friends. Many of their homes have been abandoned on Christmas Eve.

Friday has already started the evacuation of a hospital and several health centers.