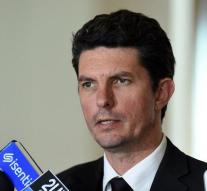 canberra - In Australian public representations, many elected are busy with their descent. They feverishly research their family roots, but not because they like it. An old Australian law prohibits MEPs from having a different nationality. And the law suddenly makes victims in politics.

The Vice-President of the Greens, Sen. Scott Ludlam, for example. He had to resign on July 14 when it appeared that Ludlow born in New Zealand also has the nationality of that country. Four days later, the promising political career of senator Larissa Waters ended. This Brisbane woman was born in Canada and still proved to be Canadian.

Parliamentarians went out to plot their background and ensure the media that they are only Australian. For example, the Minister of Justice, Matt Canavan, who resigned by these rules declared that he could not give up his Italian nationality because he did not know at all that he was Italian. It was his mother who applied for an Italian passport years ago. He is also a member of the Italian club abroad. Canavan knew nothing about it. He refuses to resign as parliamentarian.