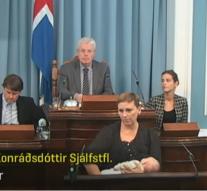 - An Icelandic parliamentarian just gave her six week old daughter breastfeeding when she was suddenly called to respond to a bill. Well, and what do you do?

Unnur Bra Konradsdottir, MP since 2009, walked to the lectern with her baby at the breast. The sight of her colleagues and the television cameras she did say her and nobody looked strange of, the Washington Post reports.

'It's like any job: you do what you have to do,' Konradsdottir later explained opposite Agence France-Presse. 'She was hungry and I did not expect that I had already speak. '

Konradsdottir said her colleagues there used to it because she often takes her daughter to the parliament 'almost since she was born. 'Normally her baby is sleeping than sweet,' I'm like, never had to worry about. '

According to Icelandic media it is the first time someone gives her baby while speaking in parliament.

The relaxed attitude of Konradsdottir and her fellow parliamentarians also consistent with the progressive parental leave policies in the country. Iceland is often described as one of the best countries in the world for new mothers, and fathers, Iceland is generous with holidays.\n  \n  \n   advertisement

In 2000, parental leave was hyped up to nine months.