Home / World / Parliament Venezuela banished from its own building 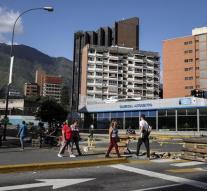 caracas - Venezuelan soldiers seem to have settled the Parliament building in Caracas. Opposition leader Stalin González said Tuesday that soldiers stopped him when he wanted to enter the building.

The parliament dominated by the opposition has shared the complex with members of the controversial constitutional assembly since Friday. That body must reform the political system. Critics see a trick of the unpopular Socialist President Nicolás Maduro to turn off the opposition.

Soldiers and the chairman of the constitutional assembly, Delcy Rodríguez, have been invaded by the opposition in the night of Monday on Tuesday, which used the parliament so far. There would be a meeting on Tuesday that the councils dominated by government officials gathered.