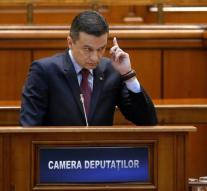 boekarest - The Romanian parliament has sent Prime Minister Sorin Grindeanu home. A motion of distrust could count on huge support, including government parties.

Grindeanu recently lost the support of his own Social Democratic PSD and the liberal coalition party ALDE. However, he refused to step up. The parliament then sent the Premier Wednesday with 241 votes to 10 and still voted home.

Romania earlier this year massacred the streets to protest against the government, which was accused of weakening a campaign against corruption. Grindeanu drew a controversial decree stating that office abuse would only be prosecuted if there was an amount of more than 45,000 euros.

According to independent observers, this was probably against the sore leg of his party fellow. They would like a prime minister to do more to protect high party members accused of corruption.