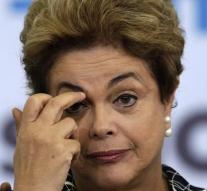 - The interim president of the Brazilian House of Commons, Waldir Maranhão, has called off an impeachment against President Dilma Rousseff. Which reported the newspaper Folha do Sao Paulo Monday.

The newspaper will be published Tuesday why that parliament has decided to stop the procedure. He would be convinced that the procedure for political reasons has been put in motion and not on the basis of the alleged missteps of the president.