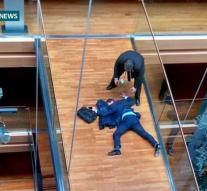 brussels - The European Parliament proposes an investigation into the brawl Thursday with Steven Woolfe of the UK Independence Party UKIP was injured. Parliament President Martin Schulz said Friday the incident 'extremely serious' and wants the inquiry committee next week formed an opinion.

Woolfe Thursday was hospitalized after a scuffle at the parliament in Strasbourg with a colleague, allegedly Mike Hookem. The prospective leader of UKIP was some time later unconscious after an 'epileptic-like attack'. He told himself again to feel good during the afternoon.

'It goes without saying that such a disrespectful and violent behavior has no place in the European Parliament,' said Schulz. Possibly the Code of Conduct has been violated and the 'unfortunate' incident legal implications, he writes.