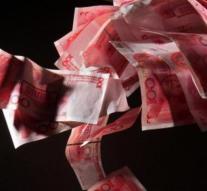 shanghai - Member have in China is a lucrative job. More than a hundred officers have on their account each converted more than a billion euros.

Members of the Chinese People's Congress and the advisory body of the government, almost all originally businessmen, their assets saw an increase by 13 percent annually over the past four years, according to the annual Huran report, which examines the distribution of wealth in China.

In total, the MPs representing about 3.5 trillion yuan (483 billion euros). That's more than the gross national product of Belgium. Since the inauguration of President Xi Jinping in 2013 is the ability of parliamentarians and members of the advisory body of the Chinese government increased much faster than the Chinese economy, which grew by an average of 7 percent per year.

Chinese leaders like to use the services of their wealthy compatriots. According to Rupert Hoogewerf, founder of Hurun Report is the main reason that the wealthiest people are loyal to the state.