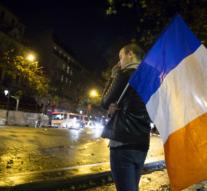 - Ninety people were killed by the attack in the Paris Bataclan concert hall, another forty people died in attacks elsewhere in the French capital. One year after the terrorist acts of ordinary life has still not returned to the city and is still a state of emergency in France. Sunday, bloody attacks are commemorated.

In the concert hall where supporters of Islamic State on Friday, November 13th opened fire, acts Sting on Saturday. The Bataclan has managed to snare a big name for the first concert since the attacks is a boost. It took the concert trouble finding reputable artists, because many were afraid of the strong emotions that will accompany the first performances.

The impact of the attacks on the peace of mind of the French are easy to read at the theater and concert visit in the country. Immediately after the attacks collapsed the nightlife largely together, but now that seems to have recovered for the most part. The visit to concerts and festivals is admittedly 2 percent less than last year, but is still above the level of 2014. Yet, says a quarter of the visitors are still not at ease, recently a survey showed. More than half say better to pay attention to safety.

The Bataclan reopens with a new look, with a new nameplate on the front and for the first time with security gates at the entrance. After reopening concert of Sting Saturday Sunday following a private commemoration with survivors and the American band Eagles of Death Metal, who stood on the podium when the terrorists started shooting. Then, a commemorative plaque will be unveiled in front of the building.

The band gave an emotional performance for hundreds of survivors in February but will be scrutinized in France after comments by singer Jesse Hughes to Bataclan employees with an Arab origin were involved in the attack.