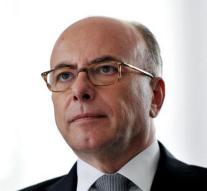 - The French National Guard have three years comprise 84,000 reservists. That the French Minister Bernard Cazeneuve (Interior) said Wednesday after a meeting of the security cabinet.

The formation of a National Guard is a response to the terrorist attacks in France. The guard should take over the anti-terror tasks of the French army. At present there are ten thousand soldiers patrol in French cities.

President Francois Hollande came after the bloody terrorist attacks in Paris last November with the idea of ​​a national guard. Last week, he announced that it will be established as soon as possible.