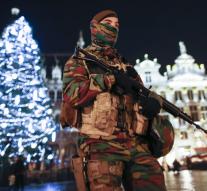 brussels - A man, who was arrested on Sunday during police operations in Belgium, has been officially indicted. He appeared Monday before the magistrate and is firmly put on suspicion of terrorism. The identity, the Belgian prosecutor will not make any statements.

It was already known that the internationally wanted Salah Abdeslam, which is linked to the attacks in Paris has not yet been found or arrested.

Sunday night were arrested a total of sixteen people. After questioning were fifteen again set free.

On Monday there were house searches. In addition, five people were arrested. Two of them are also released. Performed for the remaining three still further research and the three will appear Tuesday before a magistrate for possible further detention, as did the prosecution announced Monday.