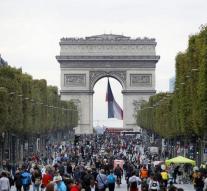 - Paris celebrated the Car Free Sunday with more ambition than last year. This time it was half of the streets, more than 650 kilometers, forbidden territory for fast traffic. The action is part of the struggle of Mayor Anne Hidalgo against the air pollution in the French capital.

Entire families and large groups of tourists took the opportunity to walk on the usually very busy avenues in the city center, around the Eiffel Tower and the Champs-Elysees. Throughout the city gave skaters demonstrations and the Seine River near the town hall was decorated as a picnic area.

In the election campaign, which Hidalgo conducted in 2014, the urban environment was an important issue. Her aim was among others to show that Paris can function without cars. One of the first decisions that the city government under her leadership took was the banishment of polluting diesels, made for 2011. Before the end of this decade should have disappeared from the cityscape. Since July 1, allowed cars for 1997 and engines for June 1999 not drive a large part of the day.