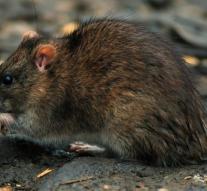 - Paris goes for years suffering from rat nuisance, but if it is located on the city council is soon past. The municipality has announced an action plan to make short work of the rodents.

Rats Exterminators be sent to the public parks in the city, where animals thrive by discarded food scraps. Five parks have been closed because of the 'treatment', reported news channel BFM TV. The Champ de Mars, the green area of ​​the Eiffel Tower on the edge, is about to close for a while to tackle the rat problem.

After cleaning operations are set out in the parks and gardens cans with rat poison. The city council will continue with an information campaign to dissuade people from eating junk or spreading to birds. And there are new trashcans where rats can not.

Rats spread pathogens. For the image of Paris, the animals also not healthy. On the Internet are countless movies rat colonies that roam the streets of the French capital.