Home / World / 'Paris' is bleak, voting will not change 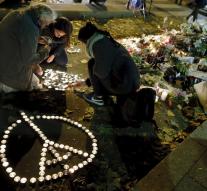 - Dutch after the attacks in Paris did not become afraid IS the terror movement. However, it makes people pessimistic about the future of the Netherlands. But " Paris " does not change much in their voting behavior.

This is evident Thursday in a poll by Ipsos Political Barometer. The representative sample of more than a thousand Dutch was conducted over the past two days. Three-quarters of the participants think that the existence of IS security in the Netherlands negatively. Last year it was 61 percent. IS also makes them more pessimistic about the future of the Netherlands (from 41 to 52 percent). But they did not become afraid : from 51 to 46 percent.

The poll shows that the PVV of Geert Wilders continues with 31 seats, the biggest would be if there are elections now. The VVD follows with 28 seats, one more than two weeks ago.

The Christian Union gets one in after the leadership change, with Gert-Jan Segers took over the reins of Arie Slob.