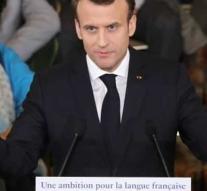 brussels - The French government urges the other EU capitals to respond jointly to the Facebook scandal. According to diplomatic sources, President Emmanuel Macron wants the EU leaders to include the issue in their final statement at their summit on Thursday in Brussels.

Concerns about possible violations of private information by European Facebook users have risen sharply after it became known that personal data from millions of account holders have been leaked in the United States. Without permission the American company Cambridge Analytica used the data for voter profiles for the Donald Trump election campaign.

The EU ambassadors for the summit will start meeting on Thursday afternoon to discuss the Facebook case. The European Commission and European supervisors say they want to find the case to the bottom.