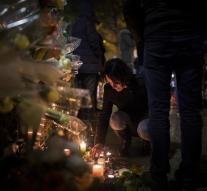 - Paris Sunday commemorates the bloody terrorist attacks of a year ago in which 130 people lost their lives. Terrorists sowed death and destruction at the Stade de France in Saint-Denis in Paris and in pubs and at the Bataclan music. The municipality of Paris, the commemorations to give an austere character.

When the massacre at Bataclan deaths nineties. The theater's Saturday night for the first time since the attacks opened again, with a concert by British singer Sting.

Sunday commemorations are held in places where the terrorists struck. There are memorials to the perished victims names are unveiled in the presence of President Francois Hollande and the Mayor of Paris, Anne Hidalgo. No speeches are held.

Then there is from 12 to 30 hours a memorial service at the Leon Blumplein where among other relatives spoke. A pianist who rushed to the rescue on the evening of the attacks, plays music and is assisted by a choir. Parisians are asked at the onset of dark to place a candle in the window. There will also be a memorial in the center along the Canal Saint-Martin.