Home / World / Parents want to save and drowning children 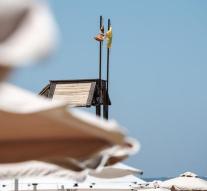 athens - In an attempt to save two of their children from drowning, their parents on the coast of Crete themselves drowned. The Greek Coast Guard said the two 35-year-old Greek parents were killed by their action at a beach in Rethimnon.

Greek media reported that the victims had seen that two of their four children were in the sea and called for help. They immediately jumped into the water and tried to rescue them. But they drowned themselves while other bathers knew the children to save. For the mother and father all help came too late.

On Tuesday evening there were many beaches in the Aegean Sea due to the strong north wind high waves.

Especially north of Crete these waves can become very dangerous, according to meteorologists.