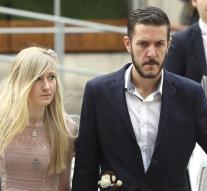 london - Chris and Connie, the British parents of the terminal sick baby Charlie, stormed out of court on Thursday. They could not convince the judge that their deadly child could benefit from an experimental treatment in the United States.

The fate of the terminally ill Charlie Gard has been the subject of discussion for several weeks at home and abroad. Parents want their eleven month old baby, suffering from a rare genetic disorder, unable to move, hear, cry and swallow, undergo an experimental treatment in the US.

The 10 month old baby is now being kept alive by medical equipment.

Doctors do not agree with that. They got permission to stop their treatment at the end of June, but Charlie's parents got a stick.

A trip to the US will only prolong the suffering of the eleven month old boy without a real chance of improvement, estimating several doctors and judges. The British Court also ruled on Thursday that the arguments of the parents were insufficient. That would mean that doctors can stop treatment so Charlie is going to die.

Father Chris hit his fist on the table. 'We're sure he's not suffering. If that were the case, we were not here. 'Then the emotional parents left the courtroom.

One day ago, the pope and Donald Trump spoke of Charlie's fate. Both offered to help the parents with the care of the baby.