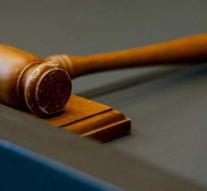 london - A British couple who had named his child after Adolf Hitler was found guilty of membership of the National Action terror group by a court on Monday. That neo-Nazi group was banned in 2016 after the members had celebrated the murder of MP Jo Cox (Labor) by a Nazi veteran.

The 22-year-old Adam Thomas and 38-year-old Claudia Patatas from Banbury in the county of Oxfordshire had given their baby the second name out of love for the former German dictator 'Hitler'. With that they established the attention of British justice.