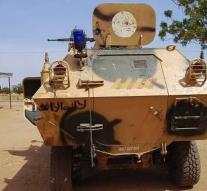 maiduguri - Some parents in northeastern Nigeria send their daughters to the jihadist organization Boko Haram for indoctrination and suicide attacks. This was reported by a spokesman for the government leader on Sunday, following confessions of some arrested girls.

They said that 'minors were donated to the terrorist sect' by their parents or guardians. The authorities have called on mental and local leaders to help put an end to these practices.

Boko Haram wants to force his version of Sharia, the Islamic law, into force in Nigeria. Since 2009, tens of thousands have come to life. An estimated two million people have fled. The muslim extremists often switch young women into suicide attacks in busy places, including mosques, markets and bus stations.

This weekend it happened again, just across the border in Cameroon in the town of Amchide. Somebody brought his or her belt to blast. At least seven bystanders were killed, police confirmed Sunday. The responsibility has not yet been claimed. On Saturday a suicide terrorist blew up in Waza, also in northern Cameroon. No other victims have been reported than the perpetrator.

Besides Cameroon and Nigeria, Boko Haram is also active in Chad and Niger.