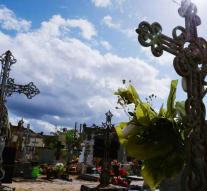 blois - More than thirty years after finding a deadly abused little girl along the French motorway A10 south-west of Blois, the parents have become obsolete and arrested. This reported French media. The mystery of 'the little martyr of the A10' has been clarified. The parents will be brought in on Thursday, according to news channel Europe 1.

Road workers found in August 1987 in a ditch along the A10 motorway, not far from the famous Chambord castle, the body of a girl. According to researchers, she was between 3 and 5 years old and only died a few hours before she was found. Her body showed numerous injuries, fractures and burns.

The French police and numerous media and institutions have undertaken more than once and futile searches for family. The girl is buried as 'the unknown of the A10'. At the end of last year, her DNA accidentally linked the police to a detainee who supposedly is her brother.