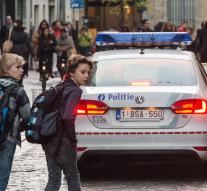 brussels - Parents who drop off their children at their school in Brussels are not allowed inside. That assignment got all schools in the Brussels Region. That in any case, the rest of the week so says the director of elementary Andrée Emile in the High Street in the center.

Schools in the capital of Belgium opened their doors Wednesday after two days of closure because of the terrorist threat. In most schools there are two policemen stationed.

Only teachers and children may have been deleted in and extracurricular activities, says the director Wednesday. " So, the children do not swim and there are no dance, gym or music lessons. Today, the doors will remain open slightly longer because not all trams, but tomorrow everyone needs to be within 08 to 30 hours. "

A mother at the school further away Baron Steens take at the door goodbye to her daughter. " She had to cry because she is used to take me to walk into. Anyway, I am glad that the school is open again and hope that everything will be back to normal soon. "

At a school in a neighborhood just outside the center, a parent or admitted. But an agent or by first searching her bag. " We hope it stays quiet today ", says the police officer.

Metro traffic was about 06. 00 start again after having stopped for four days. Some lines are shortened. Of the 69 metro stations there are still 35 open. There patrol teams of military personnel.

At the South Station are the platforms where international Thalys trains depart shielded. There is constructed a makeshift lock, which allow travelers to check tickets and possibly passport and luggage. Agents keep an eye on.

The traffic in Brussels meanwhile again begins to assume its familiar shape. Everywhere motorists stuck in traffic and the honking sound as ever. The maximum threat level four may otherwise remain in effect until Monday.