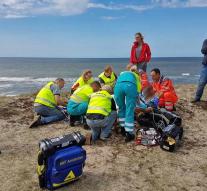 zandvoort - A paraglider was seriously injured in the dunes at Zandvoort on Saturday afternoon. At 14.30 it went wrong and the man, a German, hit the dunes hard.

Several emergency services, including a trauma helicopter from Amsterdam, proclaimed assistance. Ambulance brothers have given the victim first aid.