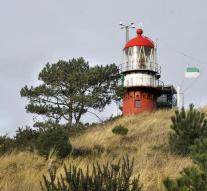 vlieland - On the North Sea beach, paraffin was washed on the island of Vlieland. The municipality of Vlieland states that paraffin is not harmful to humans and the environment, but people and animals may get sick when they eat it. The municipality therefore advises dog owners to keep an eye on their four-legged dogs.

Paraffin, which looks like candle wax, is often used to clean shipyards. A plane was searched for the perpetrator on Monday, but not found, said a spokesman for the Rijkswaterstaat.