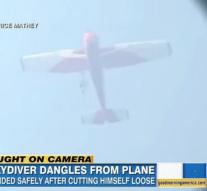 - The Peruvian paratrooper Fernando Gava came literally hanging between heaven and earth. He came immediately after spawning in the doorway 3 km height with a line caught the plane. That way he dangled less than 30 minutes under the plane.

After hanging half an hour and fruitless attempts to untangle the line, the parachutist was able to cut through the tangled cable with a knife, reported US broadcaster ABC News. The parachute continued to work with and just opened. Gava was not completely unscathed.

On the ground, it turned out that he had put the knife except to himself in the line. However, the relief was greater than the slight injury.