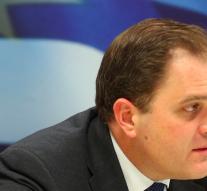 athens - The cafeteria operator on the Greek island of Lefkada was so angry at a Greek tax office on Friday that he overthrew two inspectors with pancake batters. That's what the head of the tax service, Giorgos Pitsilis, said on the Greek radio on Saturday.

The cafeteria outbreaker, who has been arrested in the meantime, wanted to protest against his unattended checks by the tax authorities. 'There are people who believe they can get away with shame, handshakes and other attacks,' said Pitsilis. 'We do not intimidate ourselves,' he added.

The Greek government is trying to improve the tax morale of citizens and businesses with controls. Particularly the wasting of VAT by entrepreneurs is a widespread practice in the southern European country. German scientists think that the size of the shadow economy of Greece is more than a fifth of the country's gross domestic product.