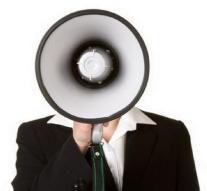 - Handy for a runner in action: you speak something on your phone, the app translates your message in three languages ​​and through a handheld loudspeaker is also once loudly announced to the crowd for you. The Japanese company Panasonic has developed such a translation megaphone. That is the end of December at the stores in Japan.

The megaphone is not just for runners, but also, for example, employees of airports, concert halls, amusement parks and stations, all places bustling crowds in the right direction should be conducted. These may include come in handy at the 2020 Summer Olympics in Tokyo.

The megaphone is Japanese messages with the push of a button translate into three hundred phrases in English, Korean and Chinese. Panasonic will eventually link the megaphone to a translation service in the cloud, so a command real-time can be translated.

Still, Panasonic still needs some tinkering with his megaphone, discovered Bloomberg. A warning that drones are not allowed, had changed after translation into 'it is forbidden to shock thieves.