Home / World / Palmyra IS now in the hands again 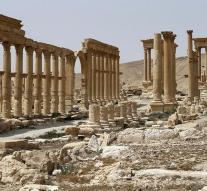 amman - Warring parties in Syria switch sides when it comes to the oasis city of Palmyra. After reports that IS fighters were driven out of the center, which she sat had conquered yet, now declared that the militants town Sunday have again completely in your hands.

Both the Syrian Observatory for Human Rights as it IS Amaq affiliated news agency reported Sunday that IS master in the historic city.

IS founded in Palmyra and the nearby Tadmur great havoc after they had conquered these cities last year.