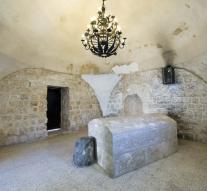 nablus - Hundreds of Palestinian youths on Friday with firebombs arson in the complex of the alleged tomb of the patriarch Joseph in Nablus. After some of them complex were invaded, seized the Palestinian security services , reports the Israeli newspaper Haaretz.

The Israeli army condemned the attack on the tomb of the patriarch, who according to the Bible led the Jewish people out of Egypt and Islam is seen as a prophet.