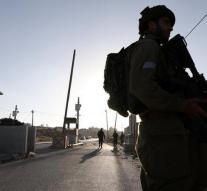 ramallah - In an Israeli military operation in the north of the West Bank, two Palestinians were killed. Attackers shot at a refugee camp on the soldiers and threw explosives to them, the Israeli army said Wednesday.

Soldiers then launched the fire on the attackers. According to the Palestinian Ministry of Health, two Palestinians were killed one hit a third. Palestinian media reported that one of the men was shot by snipers. The second man was severely injured and later died in a hospital.