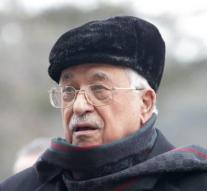 ramallah - Because of the dispute over the Temple Mount in Jerusalem, the Palestinians have decided to suspend all contacts with Israel until the most stringent security measures around the sacred complex in the Old City have been reversed. That said President Mahmud Abbas on Friday after a crisis meeting with his government.

Palestinians who wanted to go to the Al-Aqsa mosque hit Friday with Israeli security officials. During the irregularities that broke out of protest against metal detector settlements, three people died. Abbas said on television to discontinue contacts with Israel until the situation at the Temple Mount is again normal.