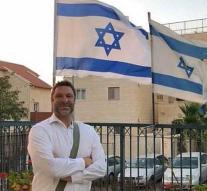 tel aviv - An Israeli settler was stabbed to death by a Palestinian on Sunday. According to the Israeli army, this happened at a busy junction for a shopping center south of Jerusalem.

The victim is an American Israeli, the 45-year-old Ari Fuld. On social media, he stood up for Israel and struck a nationalist tone. He also collected money for Jewish settlements.

The perpetrator was shot and overpowered by an Israeli citizen. Then he was arrested and detained. It would be a sixteen or seventeen year old Palestinian from a village in the West Bank. In the past three years there have been more frequent knife attacks by Palestinians on Israelis.

The Hamas Palestinian group, which is in charge in the Gaza Strip, called Sunday's stabbing 'a natural response to Israeli crimes against Palestinians. 'However, the movement did not demand responsibility. The US ambassador to Israel says that 'America is mourning now that one of its citizens has been brutally murdered by a Palestinian terrorist. '