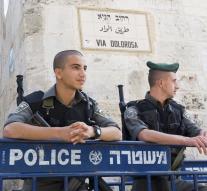 jerusalem - A sixteen-year-old Palestinian was shot dead Monday by police because a man had gone with scissors attacked on a busy street in the center of Jerusalem. The septuagenarian victim was lightly wounded by stabbing. The girl had the man supposedly mistaken for an Israeli.

When the attack also involved a fourteen year old girl, a relative of the killed girl. She also had a pair of scissors with him and was shot, but was only wounded. An Israeli passerby was also hit.

84 Palestinians have been slain since early October, some after they had attacked someone, others in clashes with Israeli forces. Nineteen Israelis and an American slain by stabbing and shooting parties or because they are hit.