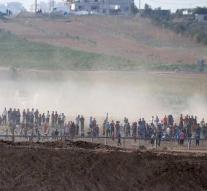 jerusalem - At least three Palestinians have been killed in new confrontations with the Israeli army. One of them is twelve years old, reports the Ministry of Health in Gaza. At least 126 other Palestinians suffered gunshot wounds.

The Israeli army reports that around 20,000 Palestinians had gathered at the border between the Gaza Strip and Israel. They threw 'bombs and grenades and tried to break through the border fence with Israel,' said the armed forces. 'That worked out ten armed terrorists, until we stopped them. 'Israeli forces reportedly shot sharply.

Palestinians have organized weekly demonstrations weekly at the secure border between Israel and the Gaza Strip, where Hamas is in power. Nearly two hundred protesters have been killed in recent months, say Palestinian officials. The army says to defend the border fence against rioters who want to invade Israel.