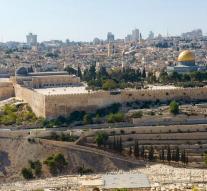 jerusalem - A Palestinian insurgents on Sunday in Jerusalem two people shot dead, including a police officer. She deceased in a hospital of their injuries. Four others were admitted for treatment. The perpetrator also came by a police bullet.

A spokeswoman confirmed early on that it was a terrorist act. The Palestinian opened at a tram stop near the police headquarters from a car fire on the people standing there waiting, and then ran off. Engine Agents give chase and were able to take him out.

The 39-year-old gunman, coming from the eastern part of the city, was sentenced by the court to four months in prison for a previous assault on a police officer. He had to report this week. Hamas claimed that he was a warrior of the Palestinian resistance movement.