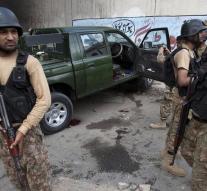 - Pakistani lawyers on Tuesday across the country went on strike after the suicide bombing a day earlier at a hospital in the southwestern city of Quetta. Thereby surely seventy people were killed, including many lawyers.

According to medical sources were sixty of the dead lawyers who had gathered for the hospital in mourning over the murder of the president of the provincial Bar Association, Bilal Anwar Kasi.

It was the latest and deadliest in a series of attacks against lawyers in Pakistan, who are seen by some as an extension of the government.


Islamic State is one of the two Islamic militant groups have claimed responsibility for the atrocity. Government officials and analysts, however, have doubts about whether the terrorist group actually was behind the attack.

The President of the Bar of the Supreme Court, Ali Zafar, the government called on to do more to protect lawyers.,, An attack on law makes a mockery of the law enforcement agencies. It undermines the promises of the state against terrorists and breeds fear among vulnerable citizens, '' he said.