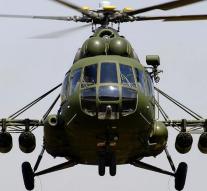 - A helicopter of the Pakistani government on Thursday made an emergency landing on Afghan territory. The eight occupants were captured by the Taliban, told the board of the Afghan province of Logar.

The helicopter was not shot down, but had to hastily countries in the unsafe border due to a technical defect, said a spokesman for the governor of Logar. The Mi-17 Russian-made, was, according to a source in the Pakistani army on its way from Peshawar to Uzbekistan for service.

The Pakistani government said still to be in the dark about the fate of the occupants. It would be seven Pakistanis, including the pilot, and a Russian mechanic.