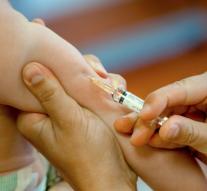 \'We hope this time 95 percent of children under five years to reach, '' said the coordinator of the vaccination program, Rana Safdar.

Pakistan and Afghanistan, according to the World Health Organization, the only countries where polio is still being transferred. Islamists have hundreds of people who were murdered involved in vaccination campaigns in recent years. The radicals claim to be a disguised attempt to sterilize Muslims.

According to the WHO, an leads on the two hundred infections to permanent paralysis. Five to ten percent of them dies, when the respiratory muscles become paralyzed.