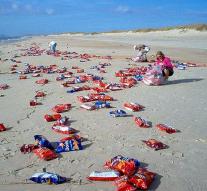 utrecht - Clearing the immense floating plastic waste soup in the Pacific is going to happen sooner and faster. 'We will start cleaning up early next year,' invented inventor and environmental activist Boyan Slat (22) of Ocean Cleanup Thursday evening. 'Within five years we have cleaned up 50 percent of the waste.'

Recent major donations of 20 million euros make this possible. Initially, after a test period, only in 2020 would begin. Due to the latest financial support, the realization of the large 'vacuum cleaners' in the ocean was accelerated. With the money, the first installations can be built. The aim is to reach fifty in the Pacific.

The donations received Slat late last year after the team of 65 experts reached a breakthrough in technology. 'We discovered how the cleanup could be better, faster and cheaper,' said the man who was aiming to tackle the plastic problem.

The biggest obstacle (how to anchor the 1 to 2 kilometer long arms 2000km from the coast) was solved. First, Ocean Cleanup wanted to attach the arms to the bottom. The researchers found that a large object in a lower layer of seawater provides sufficient resistance to capture the cleanup systems.