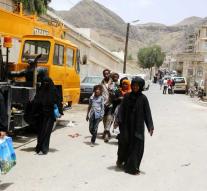 sanaa - The lives of more than half a million inhabitants of Yemen are in danger due to the army offensive at the port city of Hodeidah. The living conditions in the besieged city on the Red Sea are deteriorating rapidly, says aid organization Oxfam. More than 80,000 people have already fled their homes

For several weeks, the internationally recognized government of Yemen has bombed the city, with the help of Saudi Arabia, which is largely in the hands of Houthi rebels. Hodeidah is the most important port city of Yemen.

There is a lack of food and the heavily damaged water and drainage water system increases the risk of a renewed cholera outbreak. The United Nations and international aid organizations have been talking for a long time about the situation in the civil war-ravaged Yemen of the largest humanitarian catastrophe worldwide.