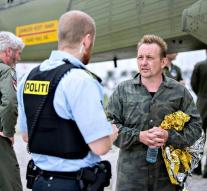 copenhagen - The owner and designer of a submarine sank for the coast at Copenhagen has been arrested on suspicion of murder or death. The captain himself was rescued, but a Swedish journalist is missing. A friend of her hit alarm. 'The woman was presumably on board,' said a Danish police spokesperson.

The suspect denies. He told the Swedish Thursday evening to have dropped off on an island in the harbor of the Danish capital before his submarine went redundant. 'I made a trial trip to test a few things. There has been something wrong with a ballast tank, 'said Ritzau press office.

After the accident report, rescue services with two helicopters, three navy boats and a number of private vessels have been sought. Divers discovered the wreck on a 7-meter deep Friday morning. Because it was not stable on the bottom, they could not enter. There is an investigation into how the 18 meter long UC3 Nautilus, launched in 2008, can be stabilized and lighted. The suspect skipper is guided on Saturday.