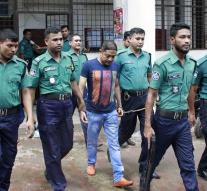 dhaka - Sohel Rana, the owner of the Bengal textile factory that collapsed in 2013, was convicted of corruption for three years in prison on Tuesday.

Rana received the maximum punishment according to the BBC's British Public Broadcasting Service, as he had failed to declare his personal possessions with the Bengali Anti-Corruption Commission.

For the disaster in the Rana Plaza textile plant, which cost more than 1100 people, Rana waits another separate process in which he can receive the death penalty. There are also dozens of other suspects, including government officials who would have allowed three floors to be built on top of the six-story building.

Rana was arrested a few days after the disaster when he tried to deviate from India. The textile industry in which he worked was still an important industry in Bangladesh. Many western clothing companies put together their items in Bangladesh because of the low wage costs.