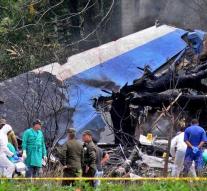 mexico city - A former pilot has seriously blamed the owner of the aircraft crashed on Cuba for poor maintenance. The Boeing 737-200 was leased by the Mexican airline Damojh. Due to the crash, shortly after departure from Havana airport, 110 passengers and crew members were killed.

Former captain Marco Aurelio Hernández Carmona said on Sunday in the Mexican media that he told the aviation authorities five years ago that Damojh made too little effort to keep his equipment and people in good condition. He worked there from 2005 to 2013. During that period there were always problems.

As examples Hernández mentioned overheated engines, overloaded aircraft and overworked pilots. Also the number of times the radar was off and corrosion of the wings was observed.