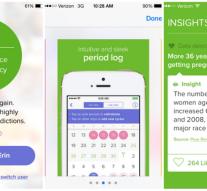 - The app Glow, which allows women to track their ovulation to see if they have become pregnant most likely, may have sensitive information made available. That reports The Verge.

According Glow involves a small risk at most a few thousand users. Glow has a total of about four million users.

The problem lies in a feature that 'connect a partner called. Users can give their partners access to their information, but others can there possibly at. According Glow there is no evidence that this actually happened.


Glow has closed the gap to update and urges all users on the app and change the password.

Glow was founded by Max Levchin, one of the founders of PayPal.