Home / Tech / Over a hundred people posted via Marketplace 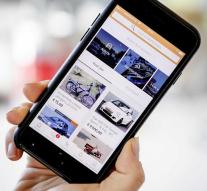 rotterdam - After a lengthy investigation, the police arrested a suspect in a litigation case via Marketplace. It's about a 33 year old woman.

She is suspected of washing money of over 100 people in 2015. Those were posted via Marketplace. She provided her bank account where people who had ordered textbooks had to pay their money. The books were never delivered.

In total, 108 people reported. Those declarations were spread throughout the country. It included aggregate payments of more than 4.000 euros. These are transferred to the woman's bank account. There were also 185 other transactions for a total of 6000 euros, but no declaration was made here.

The woman was detained at the end of last week after long-term investigation. She is free again, but is likely to appear before the court at a later time. It will decide whether it can be determined if it is indeed the wanted scammer.