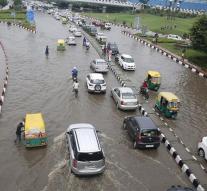 delhi - In India, 852 people have died by heavy rain since June, according to the National Disaster Team. Flooding houses and roads destroyed vegetable is priceless by crop failures.

In the west of India, 150 people came through the water scare, many of them were found this week. Most victims lived in the state of Gujarat. Also in the state of Rajasthan fell dead.

Rescue groups only save in Gujarat 17,000 people from the floods caused by the violent monsoon. Almost 113,000 people had to leave their house there.