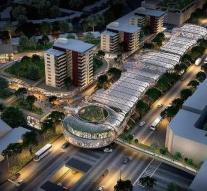 zoetermeer - There is definitely no outlet in Zoetermeer. The municipality council has launched the ambitious project, which involved an amount of 120 million euros.

The bargainwalhalla had to come in downtown and eventually draw between the five and seven million people. Immediately after the plans were launched last year, there was a lot of criticism from retailers and entrepreneurs from both Zoetermeer and the surrounding municipalities. They spoke of bread robbery. Residents feared parking problems and long files.

The Zoetermeer College wanted to take the outlet, especially in view of the expansion of the nearby Leidsenhage shopping center. Unibail-Rodamco's pampered center, which is pumping 200 million euros, is being transformed into Mall of the Netherlands.