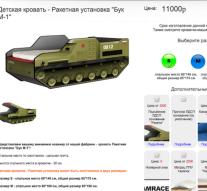 amsterdam - On social media fuss around would be a cot to order via a Russian website. Namely the furniture looks like a Buk missile system that is also shot down the MH17 device.

Through the website Carobus. just would have ordered the crib. It is not clear to what extent the product is really for sale. The journalist Oleg Kashin posted on his Facebook page, a post in which he associated to the ordering site with the message: 'Is it some kind of joke?'.

Comments on social media were very different. Negative reactions were 'what a nightmare, what a mess' and 'winning idiocy' to 'morons cotton. Positive reactions ranged from 'great design' and 'if they can earn... 'To' what's the problem? '. It is remarkable that none of the Russian reactions too far one says nothing about the downed flight MH17 in which 298 people died, including 193 Dutch.