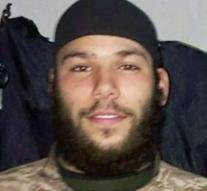 brussels - The outbreak of a do-it-yourself case in Brussels where terrorists bought material to make explosives is officially suspected of terrorism. The 39-year-old Belg Brahim T. is suspected of participating in a terrorist organization and terrorist murders as a perpetrator or accomplice, told the federal parquet.

The police arrested the man on Monday for a series of robberies in Brussels in connection with the attacks in Brussels and Zaventem last March. According to Flemish media, T.'s customer was Osama Krayem, who had explosives last year, but did not stay in Maalbeek Metro Station. Another did. Shortly before that, the terrorist cell attacked the airport at Zaventem. In total, 32 killed.

The terrorists used the explosive TATP, which is made with acetone. Krayem would also have purchased the ingredients for those explosives at the suspect's construction market near the South Station in Brussels.

The board of the Brussels court will decide to stay in front of the team within five days.